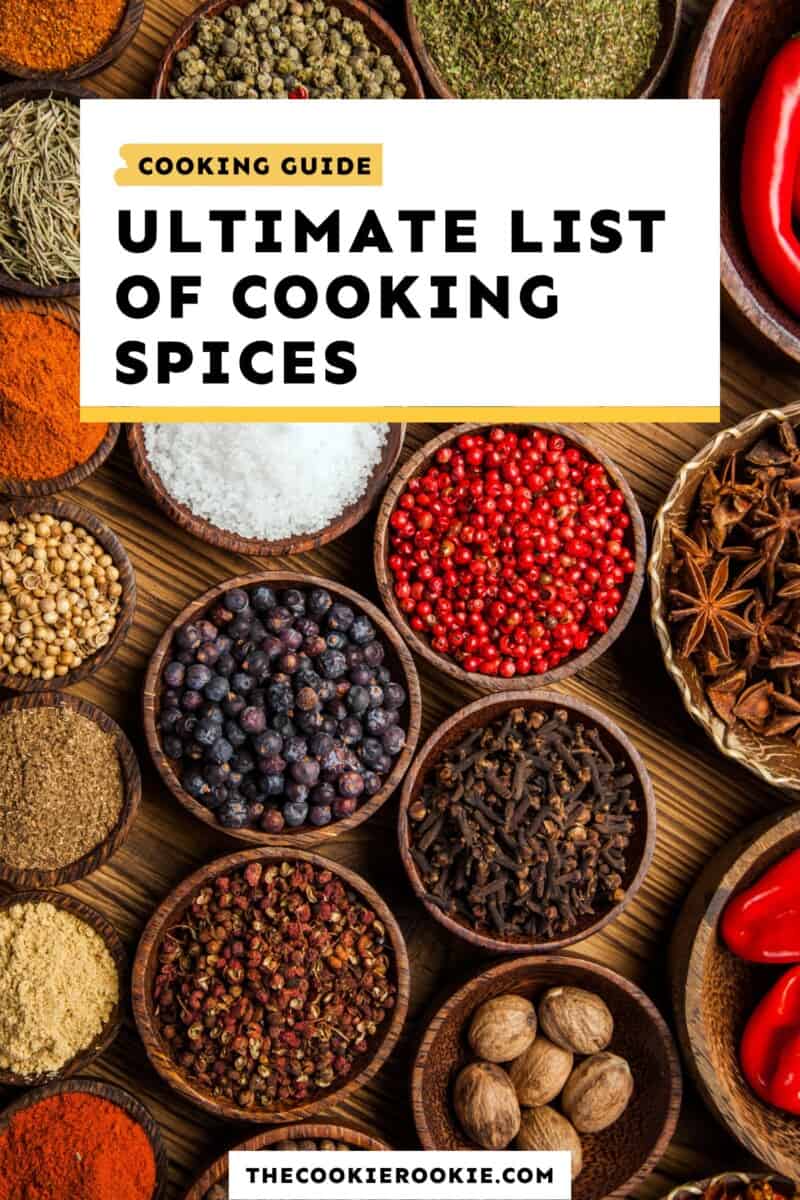 This is the only list of spices you’ll ever need! Learn about all the common cooking spices and how to use them, so you can stock your kitchen with ease. Use this spice list any time you need to find the perfect one for any recipe!

Cooking spices are an important thing to stock up on in any kitchen. They add so much flavor to recipes of all kinds–truly the only way to make amazing food!

This essential list of spices includes all the best ones you need to have on hand to use over and over again, as well as a few extras that you might not need as often. Even better, I’m explaining every spice, what it tastes like, where it comes from, and how to use it.

So consider this your guide to spices: which ones to buy to stock your spice cabinet, and when to use them in various recipes!

Spices come from various parts of different plants, including seeds, roots, and fruits. They are dried, and often ground up into a powder, although sometimes they are sold or used whole. Cooking spices are used to add flavor and color to foods.

Anything made from dried leaves, flowers, or stems would be categorized as an herb instead of a spice.

You can get most spices in either the whole form or already ground up. Both types are available for purchase at various stores, and they both have their pros and cons.

Tip! If you want to substitute one for the other, just know that ground spices are more potent (as long as they’re fresh), so you may need to adjust the amount for your recipe.

If you’re looking to stock your spice cabinet, or just wondering what all those spices even do, this list can be your guide! While you don’t necessarily need every single spice on this list, you can pick and choose which ones are most essential for your everyday cooking.

Here’s a quick look at what each spice does, when to use it, and recipes that use them!

Although the name may have you thinking otherwise, allspice is a singular spice from a dried berry, not a combination of multiple spices. But it does have a flavor profile that tastes as if it could be a blend of cinnamon, nutmeg, and clove. It’s commonly used in Caribbean and Jamaican cooking, as well as in baked goods and desserts. You can use ground allspice or whole allspice berries.

Black pepper is one of the most essential spices that you MUST have in your kitchen. It comes out of the plant as a peppercorn (like a tiny ball), and is then ground into a usable spice. You can find it at the store in the form of peppercorns to grind fresh (recommended), or in a pre-ground or powder form. It has a smoky heat that builds up nicely.

Caraway seed comes from the caraway plant. Although they are called “seeds” (which they resemble), they are actually the dried fruit of the plant, not the seeds. They can be used whole or ground into a powder. They have a bitter, earthy flavor and a sharp nutty aroma. It’s popular in some European and Middle-eastern cuisines and baking. You’ll typically find it in rye bread, some German potato salads, and cabbage dishes.

Cardamom is a warm, aromatic spice with a slightly minty flavor. It’s easily grouped in with “fall” spices such as nutmeg and cloves, and is found in chai and garam masala. It’s a popular spice in Indian and South Asian cuisine. You can buy ground cardamom or use whole cardamom pods for more intense flavor.

This spice is ground up shavings of (you guessed it) a cayenne pepper. This chili pepper packs some heat, so using it in small doses as a ground spice is perfect for cooking everyday meals. You can, however, get whole peppers for more extreme spice.

Cinnamon comes from the inner bark of “cinnamon” trees. It’s a warm spice with a bite. It’s often combined with sugar for sweet desserts and baked goods, but it can add great flavor to savory dishes and meats as well. You can buy cinnamon sticks or ground cinnamon to use in your cooking.

Cloves are the flowering bud from a family of trees native to Indonesia. It is a rich, aromatic spice that adds warmth to both sweet and savory recipes. It’s great for meat dishes and sauces, as well as warm drinks and baked goods.

Coriander seed is the dried fruit of the coriander plant. The leaves of this plant are known as cilantro in North America, so the “seeds” used as a spice have a similar flavor profile. It adds a spicy, citrusy taste, but is more nutty than the leaves. You can toast these up to add a crunch, or use them ground up.

Cumin seeds come from a flowering plant in the parsley family. They are dried and ground up into a spice that is popular in Mexican/Tex-Mex dishes, as well as cuisines all over the world. It has an earthy, bitter heat, with a hint of sweetness that balances out nicely when cooked into recipes.

Garlic powder is a ground up version of everyone’s favorite flavor additive. Garlic bulbs are dehydrated and ground into a powder so you can easily add it to dishes in a pinch. It’s not quite as flavorful and pungent as using fresh garlic, but sometimes that works better for a recipe.

Ginger is a bulbous root with a zesty, pungent, aromatic flavor when used as a spice. It can be used in both sweet and savory recipes, and because of its health benefits, it’s often used in juices, soups, and other healthy dishes. It is commonly available as a ground powder, as a whole/fresh root, or crystallized (great for desserts and adding sweetness).

Mustard seeds are the small, round (often yellow-white in color) seeds from the family of mustard plants. It adds a simple yet tangy flavor to all kinds of dishes, and makes a great addition to rubs for meats. And yes, it is used to make mustard! But it can also be used whole or ground for various recipes.

Nutmeg is the seed of a certain species of evergreen tree, that is ground up to use as a spice. Mace, another spice, is made from the seed casing. Nutmeg has a nutty, almost-sweet, warm flavor that is often used in baked goods, desserts, and warm drinks. It’s also a great spice to use with roasted veggies and meat. Mace has a similar taste, but is “spicier” and more intense.

Onion powder is a convenient way to add flavor into your recipes without fresh onions. It’s made by dehydrating and grinding up onion (of course). It’s much more potent in this form, and adds that delicious pungency to all kinds of dishes and seasoning blends.

Paprika is made from dried and ground red peppers. It has a kick of heat, but it is not intensely spicy. You can get either sweet paprika (which is usually labeled simply as paprika) or smoked paprika (the peppers are smoked before they are ground into a powder). The smoked kind, as the name suggests, has a heavier, spicier, more intense flavor. Regular/sweet paprika is lighter and slightly sweeter.

Crushed red pepper flakes are a mix of red peppers (like cayenne, bell peppers, and more) that have been dried and crushed into small flakes. It is similar to cayenne pepper, but this spice is crushed rather than ground, and contains more than just one type of pepper. It has a pretty uniform level of spice that adds heat but stays balanced.

Saffron is a long and skinny, bright red spice that comes from a flowering plant. The thread-like stigma from the flower is dried to use as a spice. Its unique flavor is best described as lightly sweet, floral, and earthy. This is a more expensive spice, best bought and used whole. So this is better as a special recipe ingredient, rather than something to stock in your cabinet.

Star anise comes from an evergreen tree, and it looks like a little brown star. This is the seed pod, and inside are the seeds, both of which are used as spices. It has an earthy yet sweet sort of licorice flavor, and the seeds are extra aromatic. Despite the name, this is not the same as aniseed, but they do have a similar flavor.

Turmeric is a bright, golden yellow spice, most often used in a powdered form. It comes from a plant in the ginger family, so even though it tastes quite different, it has a similar pungency and many health benefits. It’s earthy and aromatic, and can be used in all kinds of dishes.

Vanilla is a super popular spice that’s used a lot in desserts, baked goods, and other recipes. It comes from a flowering plant, and the seeds are encased in a long black pod. It’s commonly bought and used in its whole form (the long pod), but is also widely used as an extract.

To wrap up, here are the 20 cooking spices we covered. We definitely recommend stocking up on these for your kitchen, so you’re always ready to cook!

So many spices, so many possibilities! Now that you have this huge list of spices and know how to use them, you can stock that spice cabinet and have everything you need on hand. And you can start experimenting a bit more with your cooking, and always get the flavor you want!

Learn more about stocking your kitchen and basic cooking skills, so you’ll be ready to cook anything you like!