Straight to the Point

Our favorite pie pan was also the most unassuming: the Norpro Stainless Steel Pie Pan. It baked even, golden crusts, was easy to line with dough, and its slanted sides made it a cinch to cut and serve slices of pie. Our top stoneware pick was the Made In Pie Dish, which had straight sides and a flat edge that made it easy to crimp.

You might think of a pie pan as an afterthought, a mere vehicle for making and serving pies—surely it can’t matter as much as a good pie crust or winning filling? But the truth is, the material and shape of a pie plate can make a difference, affecting crust color, composition, and ease of serving. But this doesn’t mean the nicer looking, fancy pie plate is the de facto winner; conversely, during our testing we kept Stella Parks’ mantra (“cheaper is better”) in the back of our minds. It wasn’t easy, since some of the stoneware plates just looked so darn nice! But as we baked pie after pie, it became clear she was on to something.

The Winners, at a Glance 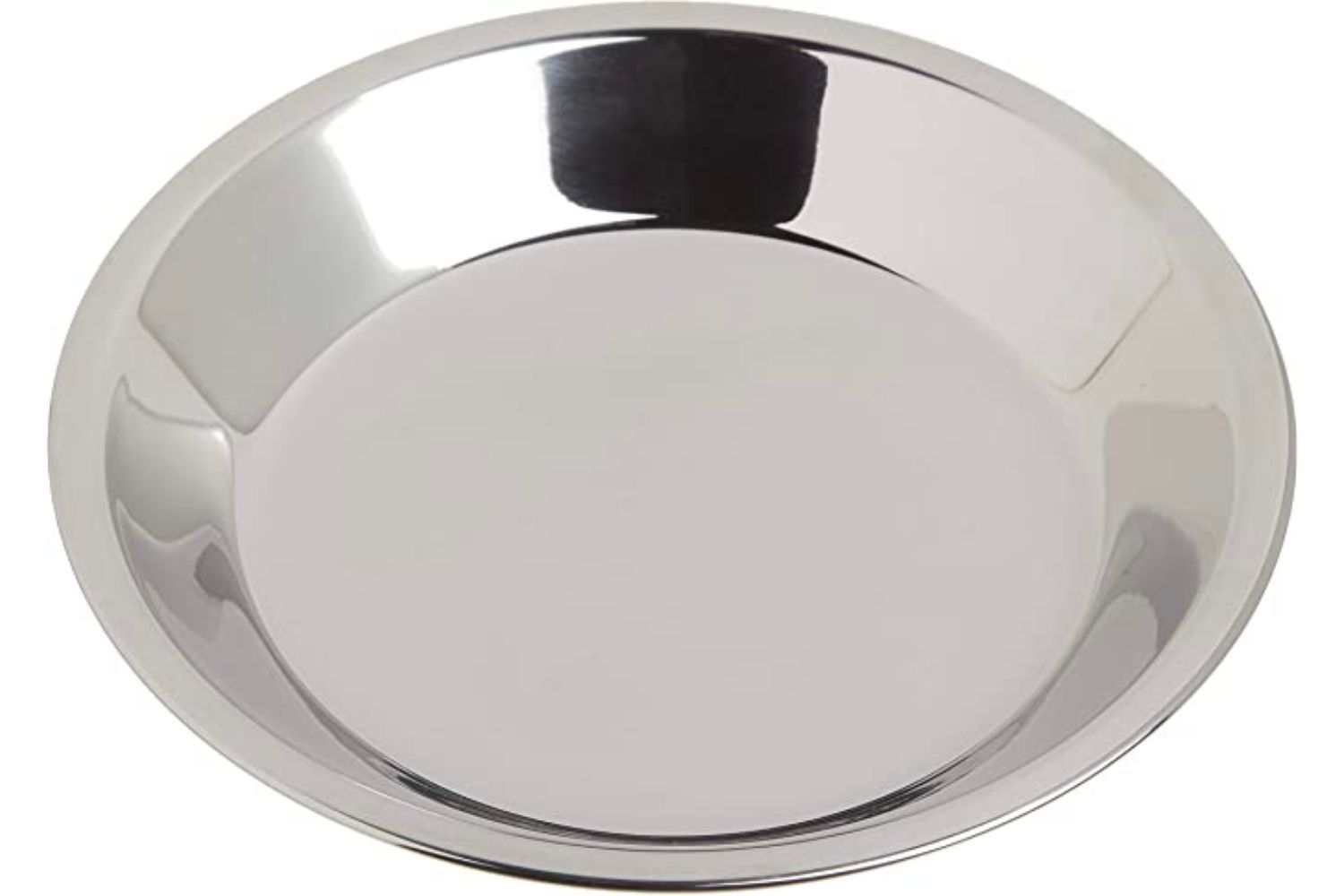 This humble, stainless steel pie plate baked up consistently golden, browned crusts, and the angled sides made it easy to line as well as remove slices of pie. The one downside: it’s not dishwasher-safe.

The Best Stoneware Pie Plate: Made In Pie Dish 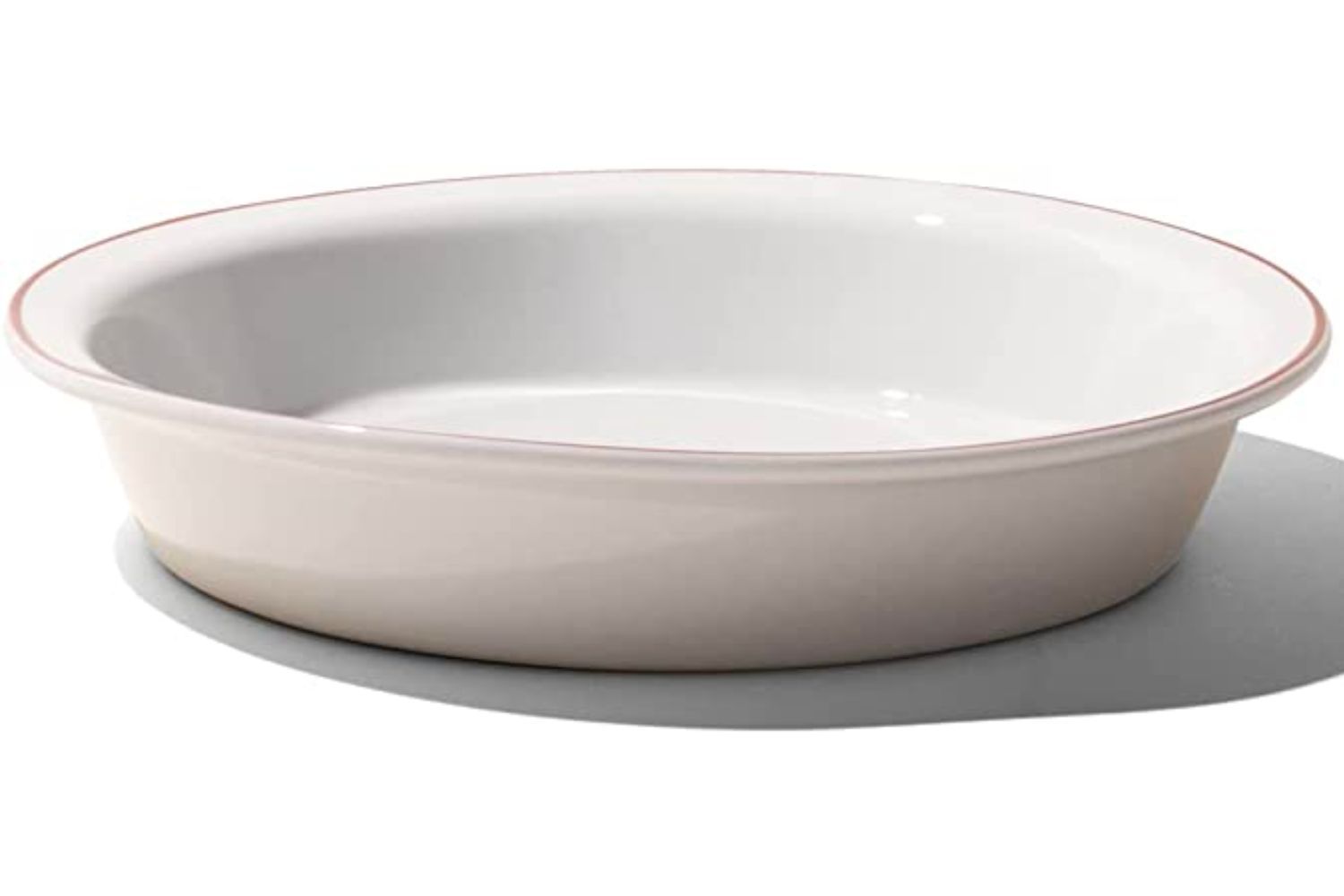 While stoneware (like ceramic and porcelain) pie plates often produced lighter crusts, the Made In still baked up decently golden pies; it was also fairly deep, making it a good choice for pies with a large amount of filling. We also liked that the rim was flat; it made it easier to crimp pie edges in different styles. 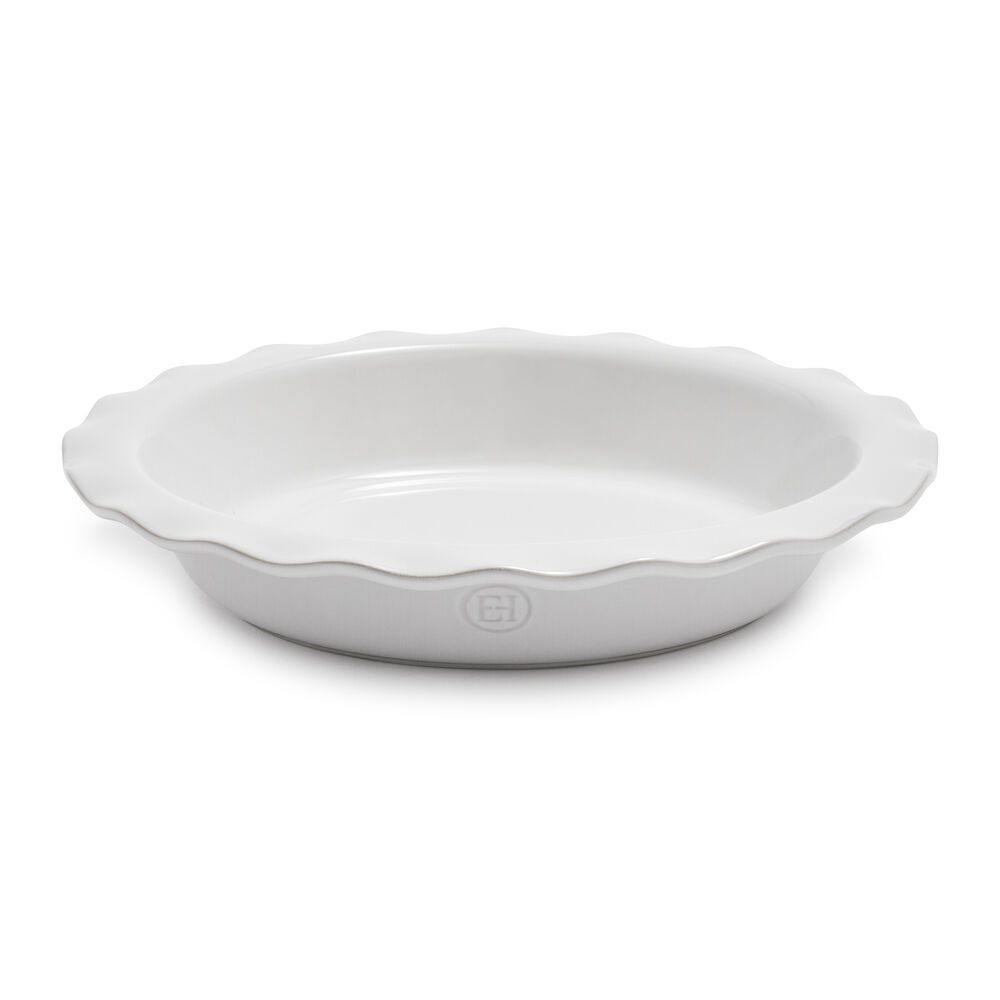 While this pie dish did have wavy edges which made crimping anything but a wavy crimp a little difficult, it still was third best when it came to baking golden crusts. While mostly even, we did find the edges were ever so slightly darker.

While stoneware pie dishes (like the Made In, Le Creuset and Emile Henry) look great, looks don’t guarantee an evenly golden crust. During our oven test, we found stoneware pans heated up to higher temps, while the stainless steel Norpro pan actually had the lowest temp. So when a pie crust was placed in each pan and blind-baked, it was the metal pan that had the darkest (read: most golden and evenly cooked) crust. This is because metal is a better thermal conductor than stoneware; instead of retaining heat, it conducts it into your pie crust. Conversely, the stoneware pans (as well as the glass pans) retained heat, not as effectively conducting it up to the crust. The Le Creuset (which was also the heaviest of the bunch) was the worst in this realm, with very pale crusts throughout testing.

A Flat Rim Was More Versatile

While a wavy edged pan is lovely to behold, it’s only useful if you’re doing one kind of edge crimp. We preferred pans with flat edges, like the Norpro and Made In, since they allowed for more variation (and creativity!) when it came to crimping. This same feature also makes it a bit easier to make chilled pies.

While we actually quite liked the Made In pan, the straight, vertical sides made it a little difficult to finagle a spatula in to remove a slab of pie. In contrast, the slightly angled edges of the Norpro and Pyrex pie pans made it easier to lift out and serve a piece of pie.

Depth Mattered if You Like Deep Dish (or Mile High) Pies

Our winning pan from Norpro was on the shallow end of the pie pan spectrum, at 1.5 inches deep; while you can make deep dish pies in it, most of the pie will be above the sides. So, if you like baking thick pies and want your pan to support the sides, the Made In or Emile Henry pie pans (at 1.75 and 2 inches, respectively) might be a better choice.

The Criteria: What to Look for in a Good Pie Pan

A good pie pan should be easy to line (whether it’s with all-butter pie dough or graham cracker crust) and should create an evenly golden brown crust. We also liked pans that had slightly slanted edges, since they were easier to maneuver a slice of pie out of then pans with straighter sides. We preferred flat, non-wavy rims for versatility purposes.

What we liked: This was the little pie pan that could; it baked up consistently even, golden crusts. The slanted sides made it easy to line the pan with dough and graham cracker crust (it also made it a cinch to serve slices), while the flat rim ensured versatility. It turns out Stella was right: cheaper is better.

What we didn’t like: It’s not dishwasher-safe, and it’s on the smaller side in terms of depth.

The Best Stoneware Pie Plate: Made In Pie Dish

What we liked: If you want a stoneware pie pan, this offering from Made In is a great option. While it didn’t produce pies as deeply golden as those baked in the Norpro, it still baked up golden, evenly browned crusts. We also liked the flat rim, which allowed for more versatility and creative crimping.

What we didn’t like: It’s pricey and doesn’t conduct heat as well as the Norpro.

What we liked: This was a stylish pie pan that performed decently; it was easy to line with dough and graham cracker crusts, and the ever so slightly slanted edges made it easy to remove pieces of pie. It also comes with a 10-year warranty.

What we didn’t like: Like the Made In, this ceramic pie dish didn’t get crusts as evenly and deeply golden as the Norpro. And while the wavy edges are aesthetically pleasing, they get in the way of creative crimping. It’s also a bit on the pricey side.

What is the best material for a pie pan?

We found that, in terms of conductivity, metal pans were the best; they produced the most evenly golden crusts.

What are pie pans used for?

Pie pans are used to bake pies; ideally, they ensure a flakey, cooked-through crust on the bottom, which is sometimes prone to sogginess.

What size are pie pans?

Pie pans come in a variety of shapes and sizes, but most of the ones we tested were about 9 inches in diameter. Depth varied, so we advise choosing a pan depending on what style of pie you commonly make.

Fri Nov 4 , 2022
Having a repertoire of great salad recipes is key. This is a list of many of the best salads I’ve prepared over the years. You’ll see a mix of chopped salads, green salads, plus grain and pasta salads. They all have an emphasis on fresh, whole, seasonal, plant-based ingredients. Enjoy! […]