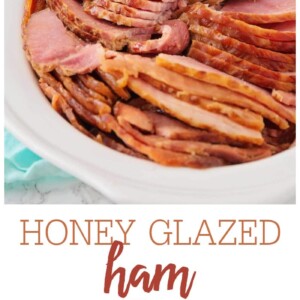 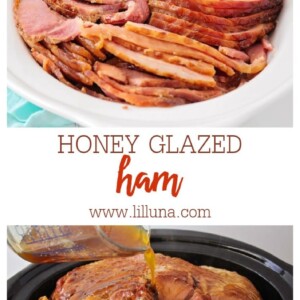 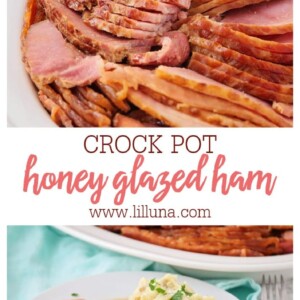 Tender and juicy Honey Glazed Ham is smothered in our simple 5-ingredient glaze. It’s our favorite recipe for holiday ham!

We have several meat recipes that make for great holiday dishes—Brown Sugar Ham, a delicious Pot Roast, the best ever Roast Chicken, and especially this Honey Glazed Ham!

Christmas is almost here! If you’re anything like me, you’re BEYOND excited to gather with friends and family – and eat delicious food. We gather with the entire Luna gang for hanging out and feeding our faces.

So many of our holiday get togethers center around food, so we love creating the menus for these nights.

We usually do Mexican food on Christmas Eve, but we love having a traditional baked ham and veggie menu for Christmas Day. Ham is also an Easter favorite!

Crock pot Honey Glazed Ham is perfect for holiday gatherings, and it goes perfectly with Roasted Brussels Sprouts and Roasted Red Potatoes to round out the meal!

I, myself, had never made a Honey Glazed Ham, but my family LOVES to eat it for the holidays. I found a simple, but delicious recipe that ended up tasting amazing. It was so juicy and flavorful, and best of all – it was SIMPLE!

It only took 5 minutes to prepare, and then the slow cooker did the rest of the work.

HAM. Place spiral cut ham slices into your slow cooker. For easy clean up, use a crock pot liner.

What is spiral cut ham? This type of ham is really convenient because the precooked ham has been pre sliced as well. A butcher begins making one continuous cut from one end of the ham to the other. These pre-cut, even, slices make it easier to slice and serve the ham at dinner. Spiral ham can come as a boneless ham or bone-in.

GLAZE. Add light brown sugar, honey, water, mustard, and cloves to a small or medium saucepan. Bring to a simmer and cook for 5 minutes. Remove cloves from the glaze and pour over ham.

COOK. Cook on LOW for 4 hours, making sure to baste or brush ham with the honey glaze every hour.

Tips for buying and preparing ham

Ham size. If the honey glazed ham is the main dish, plan on ⅓ to ½ pound per person. If you want some leftovers, add another pound or two. Keep in mind the size of your slow cooker. A 6-8 quart slow cooker can usually fit a 6-7 lb ham. I recommend you choose a ham in natural juices. Avoid ham in water.

Thaw a frozen ham in the fridge. Plan for it to take 4-6 hours per pound. Speed up the process by placing the ham in a plastic bag, and submerging it in cold tap water. Change the water every 30 minutes until the ham is thawed.

For extra flavor. Try pinning pineapple and/or maraschino cherries to the top of the ham. Use a toothpick to hold them in place. The pineapple juice and cherry juice will add a delicious layer of flavor to the ham. Add extra flavor with a dash of spices such as nutmeg, ginger, or cinnamon.

Did you know you can preheat a crock pot? Plug in the pot and start heating it up while you prepare the ingredients for the dish. Some other crock pot tips include:

STORE leftover honey glazed ham in an airtight container, in the fridge, for 4-5 days.

Reheat. Quickly reheat ham in the microwave, but the best way to get a moist reheated ham is to use a roasting pan in the oven.

Leftover ham is great to make other meals with. Some favorites include classic next day ham sandwiches as well as:

Try these Side Dishes:

Tue Nov 8 , 2022
Meow Monday – pics of sweet cats to start out the week. Occur see what Felix, Mack, and Mango have been up to!  Try to remember this post. Pin this recipe to your favourite board now to recall it afterwards! Pin This Recipe Cat Photographs to Make You Joyful Superior […]