Deanie’s buys from local fishermen and family-run businesses, all of whom survived the pandemic. “It helps that we can get wild-caught shrimp all year round. Brown, white, pink, it’s always the season for shrimp depending on the type. And the big boats can produce individually quick-frozen shrimp while they’re out on the water, so they can travel farther and that also helps us have fresh-caught shrimp year-round.”

Jonathan McLendon, born and raised in Biloxi, Mississippi, is co-owner of Biloxi Shrimp Co. He and partner Mark Mavar are buying off those large shrimp boats whose modern technology and GPS tracking allow them to catch seafood not only in the Gulf but up and down the southeast Atlantic coast as well. McLendon says a captain and two or three deckhands can stay out for weeks because they have the ability to freeze the shrimp right on the boat.

Shrimp boats travel Louisiana’s Bayou Lafourche on their way to the Gulf of Mexico. / Courtesy of Louisiana’s Cajun Bayou Tourism

And he remembers when Biloxi was known as the seafood capital of the world and his family was part of that. “I remember seeing pictures of my grandfather working in the shrimp factory. I can remember when I was in junior high and high school, there were more than a couple dozen shrimp factories. Now the shrimp industry has consolidated in Biloxi and there are only a few of us left. But together we put out more than the 28 factories did back in the day.” McLendon reports that over 15% of domestic shrimp in the U.S. comes through Biloxi and his company’s processing plant.

“It’s always shrimp season somewhere. We process pink shrimp from Florida, brown shrimp from Texas, white shrimp from Louisiana.” For home cooks, the shipping arm of Biloxi Shrimp Co. sells shrimp in a range of sizes from extra small with 61 to 90 shrimp per pound to colossal with 15 shrimp per pound, and everything in between, some peeled and deveined, and some with shells on.

Does he agree with Chifici that shrimp tastes different depending on where it’s harvested? “Even though it’s all the same species, shrimp pick up the flavor of the surroundings. Texas and Alabama shrimp come from water with sandy bottoms, and they have a very lobster-type texture and are pretty sweet. Our Gulf white shrimp in Mississippi and Louisiana waters come from more shallow and warmer saltwater. This gives a great mild and sweet taste that keeps our customers coming back for more.”

Where to order Gulf shrimp:

At White Pillars in Biloxi, shrimp can appear in more than a dozen dishes. Shrimp and grits? Yes. Shrimp in a seafood tower, shrimp ceviche, shrimp pad thai, shrimp corndogs made with hush puppy batter, skewered whole shrimp — all are on the menu. For our story, White Pillars’ Austin Sumrall and two other chefs shared their recipes for Gulf-influenced takes on shrimp salad. 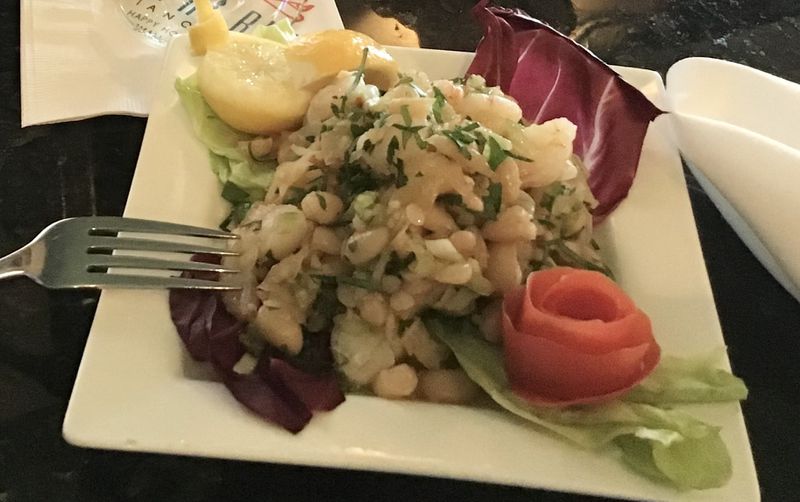 We love this recipe from Andrea’s Restaurant in Metairie, Jefferson Parish, Louisiana. Feeling flush? Add more shrimp. Feeling a little poor? That’s when cannellini beans are your friend. The textures are complementary.

When he supplied the recipe, chef-owner Andrea Apuzzo of Andrea’s Restaurant told us, “This salad has a rich cultural background. Eating beans is for the poor and eating seafood is for the rich. Forget for the moment that both can be delicious. Thus this mixture of beans and lightly poached Gulf shrimp has picked up the tongue-in-cheek name.”

— From a recipe provided by Andrea Apuzzo of Andrea’s Restaurant in Metairie, Jefferson Parish, Louisiana. 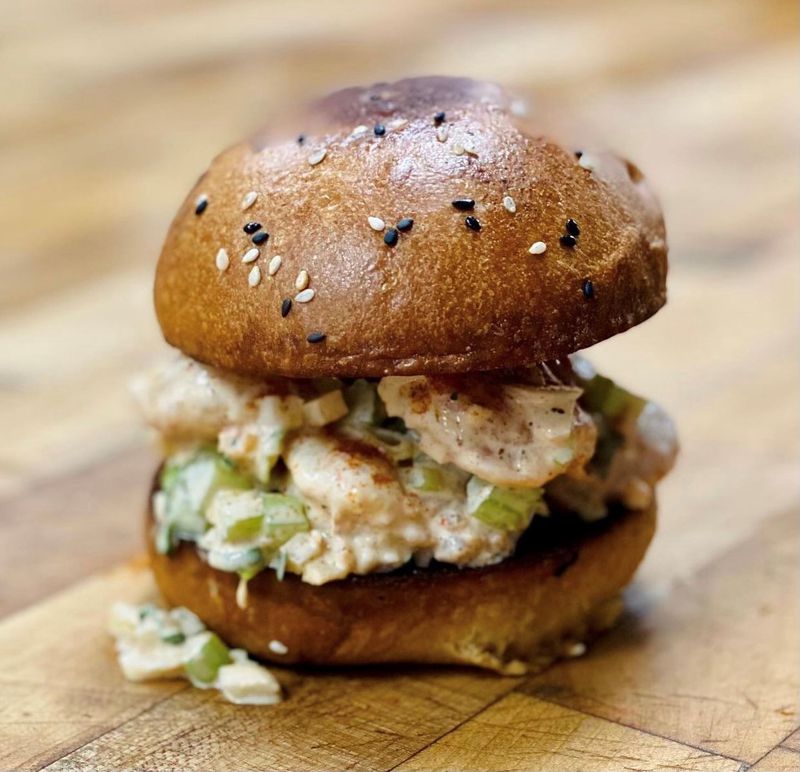 Austin Sumrall, chef-owner of White Pillars in Biloxi, likes having shrimp on the menu because he says shrimp is really the backbone of the community. “A lot of Biloxi is built around the seafood industry and shrimp is a big part. Shrimp are a product of their environment and I think our Mississippi shrimp are the sweetest, plumpest and most delicious.” During his culinary training in New York, one of his favorite splurges was a lobster roll. When he opened his restaurant, he made a version with big Gulf shrimp instead.

The biggest surprise in this recipe is poaching shrimp in butter rather than in seasoned water. The result is shrimp with a softer texture and richer flavor. At the restaurant, the sauce starts with house-made aioli. We’ve substituted, with the chef’s permission, Duke’s mayonnaise instead.

You’ll end up with most of your pound of butter at the end of the poaching. Sumrall says the leftover butter is perfect for the next time you’re preparing a pasta dish with seafood.

No creme fraiche on hand? Sumrall says it’s OK to substitute sour cream. And he suggests serving your rolls with the crunchiest kettle chips you can find.

— Adapted from a recipe provided by Austin Sumrall, chef-owner of White Pillars in Biloxi, Mississippi. 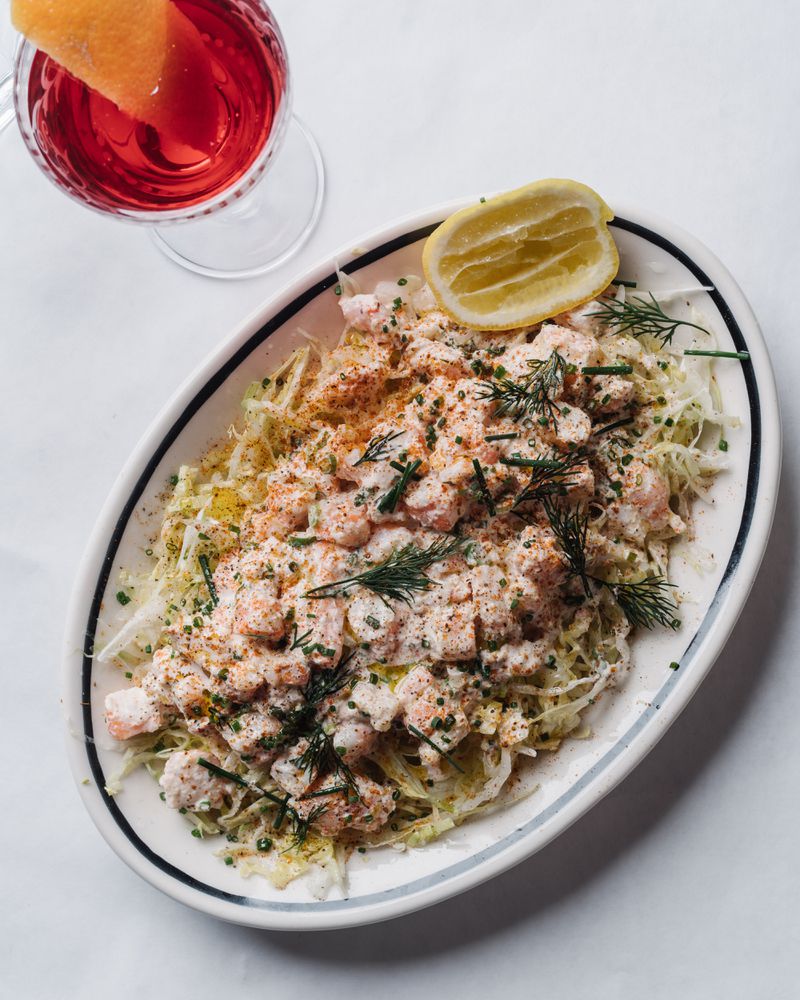 La Lucha’s Shrimp Remoulade, from Ford Fry’s restaurant in Houston, is based on a sauce that his grandmother made. Courtesy of Andrew Thomas Lee

We think of Ford Fry as Atlanta’s own, but he’s Texas-born and in addition to his Atlanta restaurants, opened La Lucha in Houston. “My all-time favorite salad is La Lucha’s Shrimp Remoulade. It’s my grandmother’s horseradish-heavy remoulade recipe tossed with poached Gulf shrimp and served over shaved iceberg lettuce, garnished with a half lemon,” Fry said.

— Adapted from a recipe provided by Ford Fry and served at La Lucha restaurant.

— Adapted from a recipe provided by Ford Fry and served at La Lucha restaurant.

Tue Jun 22 , 2021
How to cook like a celebrity chef: Darren Robertson shares his seasonal secrets – from the flavour-filled condiments ALWAYS in his fridge to his perfect roast chicken recipe Celebrity chef Darren Robertson has shared his guide to seasonal cooking   The chef said his go-to flavour boosting products include kimchi and […] 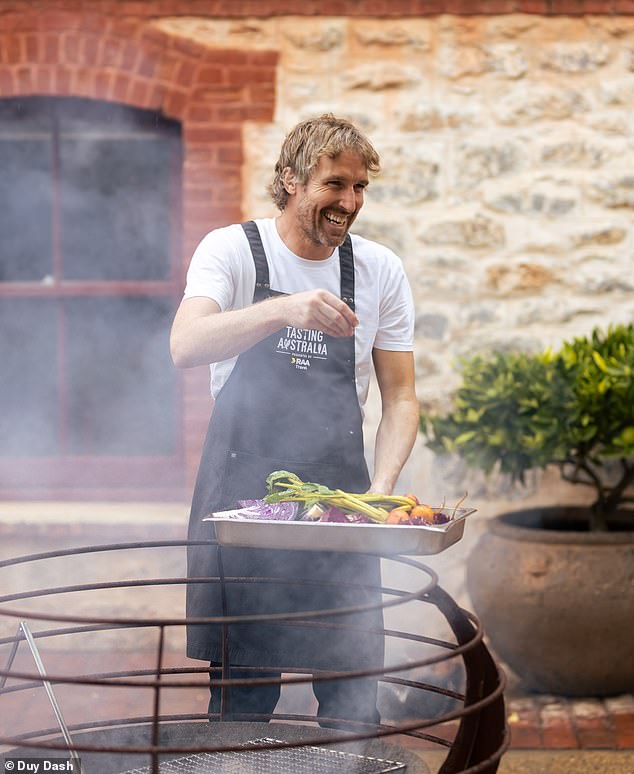